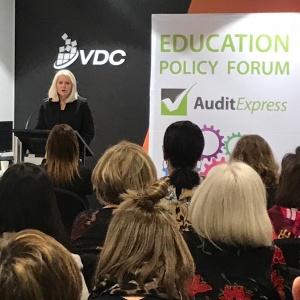 Assistant Minister Karen Andrews MP at the at the Federal VET Policy Forum.

Key stakeholders from the vocational education and training (VET) sector, including decisions makers and thought leaders from TAFE Organisations, Private Registered Training Organisations and Community Education Providers met in Melbourne on 16/07/2018 at the Federal VET Policy Forum to discuss the future of the Australian VET Sector, which has been plagued by scandal and poor government policy. 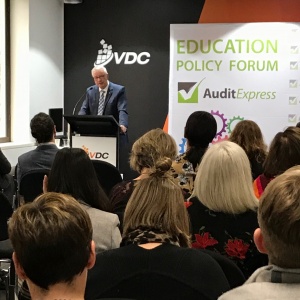 The forum was held at the VET Development Centre, and was organised and hosted by Audit Express, an assurance and advisory firm that specialises in education policy.

Kevin Ekendahl, CEO of Audit Express said that his team had organised the forum to promote cohesion and harmony within the vocational education and training sector, and to encourage all providers to work together to build a stronger sector.  “For too long our sector has been used as a political football, we organised this forum to promote good policy in VET as we’ve seen the detrimental effects bad policy has on our sector, students and the economy” said Mr Ekendahl.

The forum was attended by more than 100 guests, representing some of Australia’s largest and highly regarded TAFE’s, RTO’s and Community Education Providers. The forum kicked off with presentations from Mary Faraone, Chair of TAFE Directors Australia (TDA), Rod Camm, CEO of the Australian Council of Private Education & Training (ACPET) and Don Perlgut, CEO of Community Colleges Australia (CCA), who each presented the challenges, concerns and needs of their parts of the VET sector.

Mary Faraone, Chair of Tafe Directors Australia, called for the removal of the 20% tax of students who take on a VET Student Loan. Ms Faraone said that VET is currently a “hard sell”, as evidenced by the decline in government-funded training, and the impact of issues such as demand driven university admissions and the VET student loan scandal. Ms Faraone also shared her concerns about the prospect of a looming skills mismatch – “people without jobs and jobs without people”, and that this is worsened by funding being uneven across states and territories, and student choices distorted by differing taxation and support arrangements between university and VET.

Don Perlgut, CEO of Community Colleges described the VET Sector as being the “Middle Child” of the greater education sector, and gave a plea for our government to demonstrate National Leadership, “calling for our national politicians to provide real vision and leadership in Australia’s VET space, developing bi-partisan approaches to national challenges”. Mr Perlgut noted that “it’s time for proper funding: don’t tell me that we don’t have the money, because we surely do, when we are considering tax cuts across the board”.

Rod Camm, CEO of the Australian Council of Private Education and Training (ACPET) said that “we need a vision, we need a national policy framework and we need to take ideology out of VET”. He also said that “the current construct of our system has to have a fundamental rethink”.

The forum attendees also heard from Assistant Minister Karen Andrews, who delivered her vision for VET, which was focussed on building on the past, securing our future. The Assistant Minister spoke about her support of innovation in the VET Sector, in particular of her support for micro-credentials, skill sets and innovative training programs that lead to employment for students. Assistant Minster Andrews also outlined the review of the AQF that is currently taking place. You can read more about the Assistant Minister’s announcements here.

Finally, the forum heard from the Shadow Minister Senator Doug Cameron, who spoke of his commitment to ensuring that a full inquiry of the VET Sector will take place should Labor win the upcoming Federal election. Senator Cameron also spoke of his unwavering support for TAFE’s, re-iterating that 2/3 of funding of VET will go directly to TAFE under a Labor led government. You can read Senator Cameron’s speech here.

Both Minister Andrews and Shadow Minister Cameron agreed on a number of key points, including the reality that training packages are currently outdated, in many cases not responsive to the needs of industry or current job roles, and that structure of both training packages the overall Australian qualifications framework is in desperate need of a rethink. Senator Cameron said that qualifications were narrow and not fit for purpose. He then raised the question “are Training Packages operating for public good?”.

One thing was clear from all presenters and the agreeable audience, that is the current Training Packages and the framework in which they operate are not working and are in desperate need of a re-think and new direction.

Attendees at the forum took to twitter throughout and after the forum with mixed views of support and frustration.

1. In the lead up to this Federal Election the team from Audit Express encourage you to participate in the policy discussion, especially when it comes to Vocational Education and Training. You can do this by following the three key industry representatives and member organisations, which can be followed here:

2. Keep in close contact with your relevant member organisation or industry representative organisation. If you see or hear something happening in the VET Sector that you disagree with or are unhappy with, or if you are passionate about a particular topic or issue, always remember that “the pen is mightier than the sword”. Never underestimate the power of writing to the minister, or your local senator or member of parliament. For more information on contacting your local senator or MP, click here.

3. Be active and vocal on social media about the issues that you care about!

Senator Doug Cameron talking about that businesses should be paying for their own training says “the business culture in this country is terrible” at the @audit_express led National Education Policy Forum. #Education #Policy #ACPET #TAFE #VET #VETPolicyForum #CommunityColleges pic.twitter.com/vTI1DRcuQO — Andrew Shea (@andrewshea2) July 16, 2018

#Innovation vs #regulation in #VET is a battle, change to thinking is needed, many providers are non compliant at audit, growth is in non-accredited, competency & skill set enrolments, #TrainingPackages don’t cater for #Industry4.0 #capabilities @ACPET_national #VETPolicyForum pic.twitter.com/4sHPWyWZKK

#Qualifications that are narrow, not fit for purpose, developed but with no demand, #Australia’s #VET system is not better than #Germany says Doug Cameron time to reconsider #TrainingPackages & market @karenandrewsmp @audit_express @VDCeduau @ACPET_national @TafeDirectors pic.twitter.com/0mtbN49OAx

Are you looking for an experienced auditor or compliance consultant? Drop us a line today!